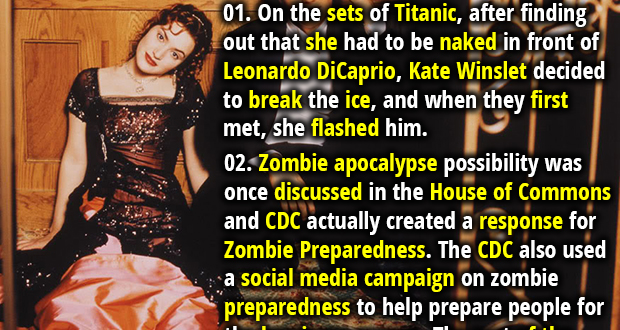 Here are 50 funny facts that we bet will make your day.

01. The gym on the top floor of the US Supreme Court Building has a basketball court which has been aptly nicknamed “the highest court in the land.” – Source

02. A lifetime Cleveland Browns fan and season ticket holder requested in his obituary for “six Cleveland Browns pallbearers” at his funeral. Why? “So the Browns can let him down one last time.” – Source

03. On the sets of Titanic, after finding out that she had to be naked in front of Leonardo DiCaprio, Kate Winslet decided to break the ice, and when they first met, she flashed him. – Source

04. In 2013, a school in Brooklyn had to be shut down after 6th graders sprayed enough Axe body spray to cause 8 students to be hospitalized. – Source

05. Cheerleading was initially an all-male sport. Females were only added to the equation when smaller, lighter bodies were needed for “flying.” Also, George W. Bush was the head cheerleader at his high school. – Source

07. President Coolidge was a prankster who liked to buzz for his bodyguards and then hide under his desk to make them believe he’d been kidnapped as they frantically searched for him. – Source

08. Astrophysicist Neil DeGrasse Tyson considered becoming a male stripper to make money during graduate school. When he visited the club, the dancers came out with lighter fluid soaked jockstraps and set them ablaze while dancing to “Great Balls of Fire.” He immediately left and chose math tutoring instead. – Source

10. The word “Testify” comes from the same root as “Testicles”: Before the practice of swearing on a holy book became commonplace, witnesses would literally swear on their testicles that they weren’t perjuring themselves. – Source

11. In 1896 the speed limit was 2mph and the first ever speeding ticket was handed to someone hurtling along at 8mph. There was a 5 mile police chase with the policeman pursuing on a bike. The driver also failed to have someone waving a red flag walk in front of the car to warn of his approach. – Source

13. In Lucerne, Switzerland, you can hire an evil clown to stalk your child for a week before their birthday, and on that day, he will smash a cake into your child’s face. – Source

14. According to a 2014 survey by a Christian retailer in Nashville, 7% of Christian Americans pray for a parking spot! – Source

15. The possibility of a zombie apocalypse was once discussed in the House of Commons and the CDC actually created a response for Zombie Preparedness. This did come in use once. CDC used a social media campaign on zombie preparedness to help prepare people for the hurricane season. The cost of the campaign was $87, which left 3.6 billion impressions with marketing worth of $3.4 million. – Source

17. In 2009, a drunk New Zealander lost a poker bet and had his name changed to “Full Metal Havok More Sexy N Intelligent Than Spock And All The Superheroes Combined With Frostnova”. He found out that it was accepted 5 years later after receiving a confirmation letter. – Source

18. In 1956, for a bet, while drunk, Thomas Fitzpatrick stole a small plane from New Jersey and then landed it perfectly on a narrow Manhattan street in front of the bar he had been drinking at. Then, two years later, he did it again after a man didn’t believe he had done it the first time. – Source

19. Carrots don’t really significantly improve eyesight. This urban legend was a propaganda released in WW2 by the Royal Air Force to hide their new secret technology of Airborne Interception Radar that helped them repel German bombers better. They attributed their pilots’ success to a carrot-rich diet in order to keep the technology a secret. – Source

20. When King Conrad III placed Weinsberg under siege, all the woman of the castle made a deal which let them leave with whatever they could carry on their shoulders. Leaving everything else, each woman took her husband and carried him out. Conrad laughed and said, “A king should always stand by his word.” – Source

21. Bjorn Ironside, a legendary Viking, once attempted to take the city of Luni, but could not breach the walls. So he devised a plan where he eventually was brought in on his “deathbed”, only to leap from his coffin and hack his way to the gates and allow his army to take the city. – Source

22. When college football teams traveled by train, Auburn students would literally grease the local stations tracks before Georgia Tech games, causing the train to overshoot the station and forcing the Tech players to carry their luggage for miles. – Source

23. Englishman Horace De Vere Cole was an eccentric prankster who once gave out tickets to a theatrical performance to bald people so that when the light shone on their heads it would spell out “bollocks.” He and his friends also once pretended to be Abyssinian royalty by putting on a blackface and tricked the British Royal Navy into letting them inspect their flagship, the Dreadnought. This now called the Dreadnought hoax. – Source

24. In the 1800s a prankster managed to get countless people, including the Archbishop of Canterbury, to show up at 54 Berners Street in Westminster, England, all on the same day by ordering a bunch of fake services and deliveries to that address. Police had to be called to try and corral the hundreds of tradesmen and visitors as the street descended into chaos. – Source

25. In the 1600’s, London was plagued by an attacker who would grab unaccompanied women, lift their dress, smack their bare bottoms and yell “spanko!” while running away. He would appear, carry out his attacks and vanish with such speed that some people attributed him with supernatural powers. Male vigilantes used to dress in women’s clothing and patrol the areas he was known to operate in. – Source

ABOUT US
Contact us: contact@piqueen.com
© Newspaper WordPress Theme by TagDiv